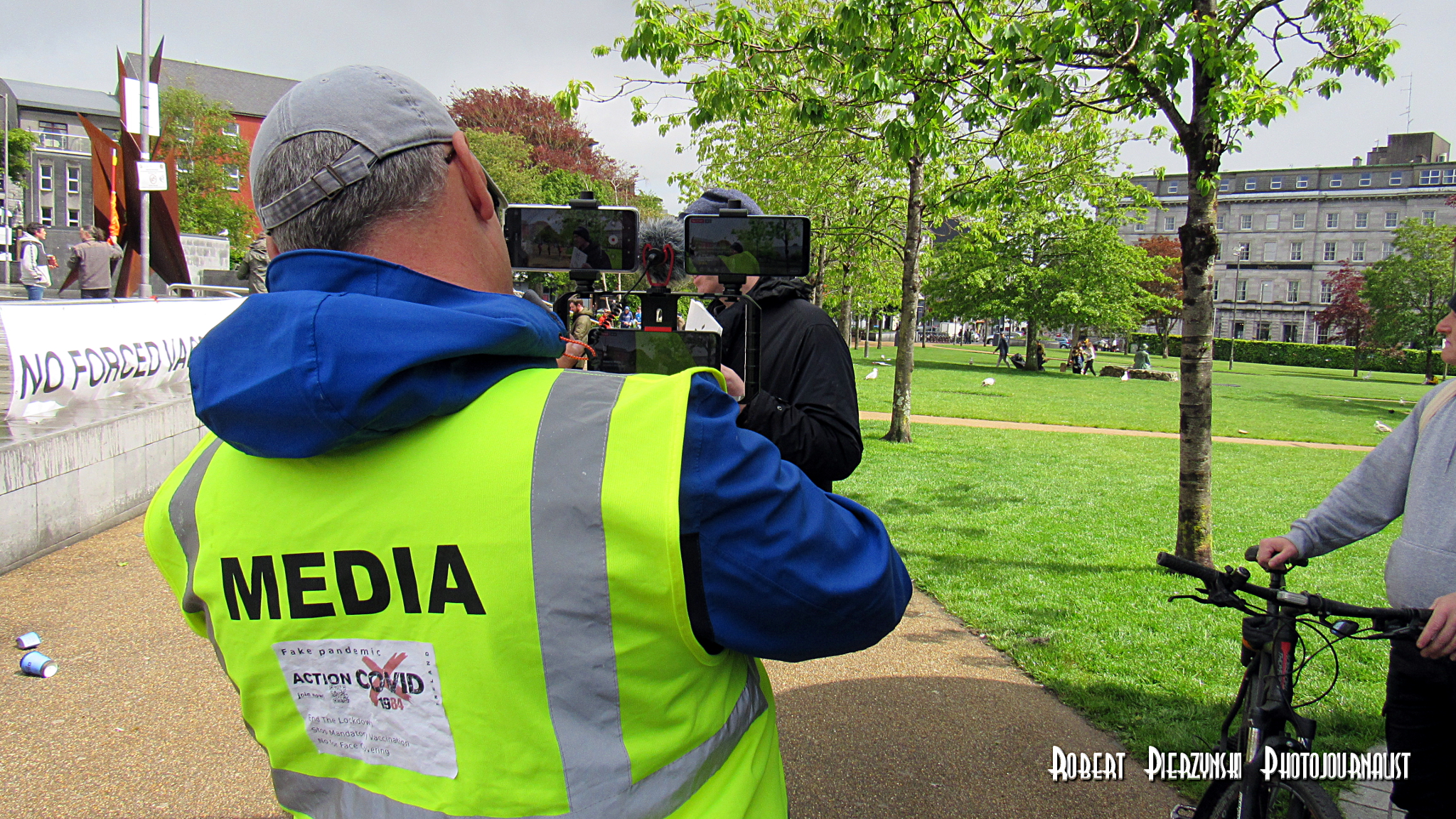 The Voice of Liberty from Portlaoise

A small group of us formed back in April. Inspired by the Monday Marchers, which started in Cork and spread to different towns, we painted up signs and placards and four of us began to stand on the street in our local town of Rathdowney, Co. Laois every Friday for two hours. We continue to … END_OF_DOCUMENT_TOKEN_TO_BE_REPLACED

On October 2, 2021, the Freedom Rally took place in Roscommon. Free Speech Platform stands in the city center. It was the first event of this type in this city. As always, I was broadcasting live for my media partners Hello Ireland and Action Covid 1984. I took photos and prepared a video report. Watching … END_OF_DOCUMENT_TOKEN_TO_BE_REPLACED

September 29, 2021. Australian Embassy in Dublin. A dozen or so people gather in front of the building to protest against the fascist actions of the Australian government against the public. They put up a banner, set up a sound system, and then …  Garda officers arrest Dara O’Flaherty. What for? In my opinion, it … END_OF_DOCUMENT_TOKEN_TO_BE_REPLACED

Garda does not allow Jam for Freedom to continue at St Stephen’s Park, Dublin

On September 24, in my blog, I informed about Jam for Freedom’s return to Dublin. The first performance was scheduled for Sunday, September 26 at St Stephen’s Park. The event was broadcast by my friend from Action Covid 1984. After about 15 minutes of the performance, three Garda officers came and did not allow the … END_OF_DOCUMENT_TOKEN_TO_BE_REPLACED

Last Saturday, together with a few Free People, we went to the NUIG campus. There is a purely communist propaganda exhibition there. You can find all the details in the video below, where David O’Reilly and Dara O’Flaherty comment on the situation. Please share this post. People need to know the truth.

Jam for Freedom Ireland are returning to Dublin

Jam for Freedom Ireland are returning to Dublin this Sunday at St Stephen’s Park by the bandstand. Playing from 2pm. There is also a second event happening in Dublin on October 17th at People’s Park as well. More info on the poster…I invite everyone who loves music and freedom

An unexpected twist at the World Wide Freedom Rally in Dublin

September 18, 2021. Dublin. I walk with the cameras turned on to the Custome House and see a Garda carrying out suspicious interventions against two Free People. I go over to them and record the whole situation. Video below. This is how I started broadcasting the protest, which surprised everyone. From the moment we started … END_OF_DOCUMENT_TOKEN_TO_BE_REPLACED

Another weekend and another live broadcast. This time I was honored to take part in the Freedom Rally in Ennis, a small town in County Clare. It was the first peaceful protest of this type in the city. The protest was against restrictions, sanitary segregation, discrimination, compulsion to vaccinate, etc. Ever since I started broadcasting … END_OF_DOCUMENT_TOKEN_TO_BE_REPLACED

This Saturday at 2 p.m. in the center of Ennis, Co. Clare, it’s going to be the Freedom Rally. I invite all interested people to participate in this event. Stand up for children, for human rights, against medical tyranny, etc. Don’t be indifferent. I will be attending this important event and broadcast live for http://www.helloirlandia.ie … END_OF_DOCUMENT_TOKEN_TO_BE_REPLACED

Something went wrong. Please refresh the page and/or try again.

Viewing the world with a different vision!